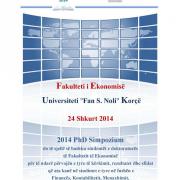 The program of Symposium…..

The leaflet of Symposium…..

International Scientific Conference “ South Eastern part of Albania for the Possibilities & Challenges of Albanian and Western Balkan Countries towards the Integration processes”.

Scientific Session “The negative consequences of the intellectual emigration in the country’s economic and social development”,  organized by the Foundation “Friedrich Ebert” in cooperation with SESS (The Centre of Economic and Social Studies) and Faculty of Economy, “Fan S. Noli” University, Korçë.